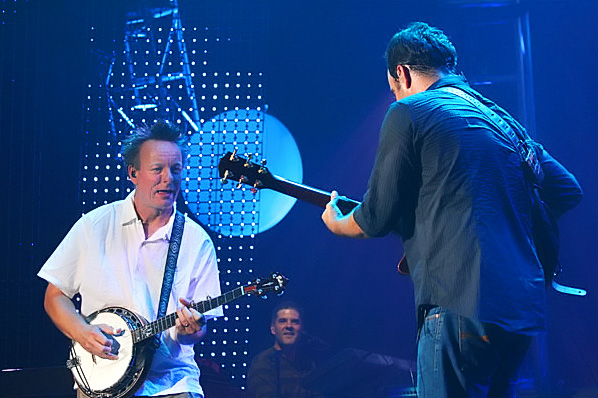 I am so proud of my friend, Danny Barnes for winning of this most prestigious of banjo awards. Danny has played our banjos for over 7 years now and even has his own Bishline Danny Barnes model. We’ve always thought Danny was a banjo genius and now the whole world knows!
Congratulations Danny, you deserve it!
Rob 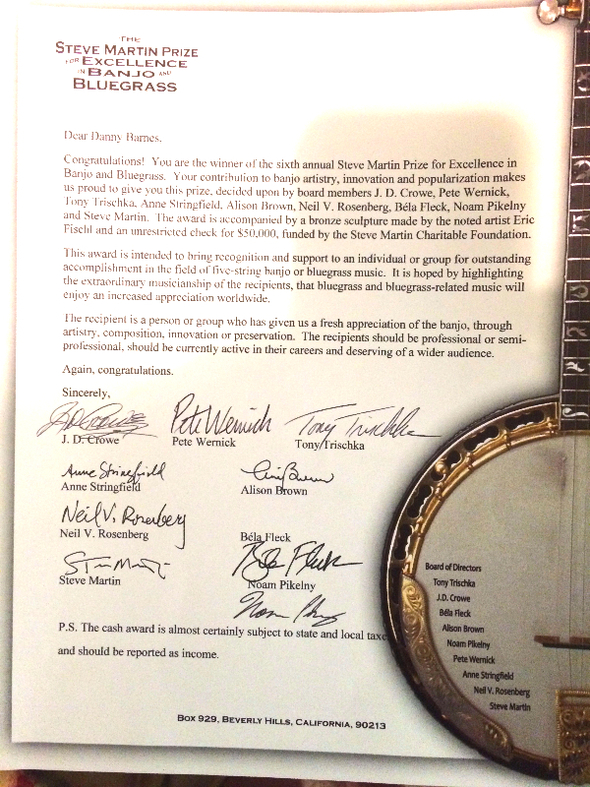 “As if dedicating your life to an instrument like the banjo wasn’t sufficiently avant-garde, the winner of this year’s Steve Martin Prize for Excellence in Banjo and Bluegrass is a musician recognized for his experimental approach to that seemingly quaint stringed instrument.” –New York Times, Dave Itzkoff

“Saying that Danny Barnes plays the banjo is like saying Lionel Messi kicks a soccer ball. Barnes doesn’t just play the banjo—he plucks it, thrums it, claws it, bashes it, runs it through processors, plays it backward, drenches it in reverb, and layers it over computerized drums, distorted guitars, and weird chicken sounds. His prowess with the instrument makes him a deserving winner…” –Texas Monthly, Michael Hall

ASHEVILLE, NC — Banjo player extraordinaire Danny Barnes is the 2015 recipient of the 6th annual Steve Martin Prize for Excellence in Banjo and Bluegrass. Described as “one of a kind” and widely acknowledged as “one of the best banjo players in America,” Barnes is recognized for his experimental sound. The raw and unpolished musical breadth of his compositions has propelled him across the industry today. Barnes will be releasing a new solo record, a ten year anniversary re-recording of an earlier album called Get Myself Together [2005]. The new release,Got Myself Together, comes out in November on Eight 30 Records. He will be on the road solo this fall and winter; stay tuned for dates to be announced.
A Texas native now living northwest of Seattle, Barnes is one of bluegrass music’s most distinctive and innovative performers. He is known for blending together different sounds which defy labeling while redefining the banjo’s perceived image in a wide-ranging and four-decade long career. From his early days as the driving force behind the impressive Austin-based Bad Livers, a band of pioneering Americana missionaries, through a prolific solo career and the development of his trademark approach he calls “Barnyard Electronics” (which is also the name of his 2007 album) that incorporates digital technology and various effect pedals to stretch the tonal range of the instrument, Barnes has always listened to his proudly offbeat inner voice. His live shows involve a computer program he built in max/msp and a banjo.
Recently, he was recording in his home lab when a package arrived from Steve Martin with a letter notifying him that he was the recipient of 2015 recipient of the Steve Martin Prize for Excellence in Banjo and Bluegrass.

“The day that package came from Steve, I had gotten up at like 4am when it’s real quiet and I can get recording done. When FedEx came, I was kind of preoccupied. I saw that it was from Steve and thought, ‘Oh cool… he’s sent me one of his records.’” says Barnes in aninterview with John Lawless in Bluegrass Today. “But then I thought… ‘Hey, I never gave him my address.’ I had met Steve earlier this year at a show with the Steep Canyon Rangers, and we got to talk a little bit, but I didn’t remember giving him my address. When I opened it up and saw what it was, I was completely stunned. I was speechless. I’ve never won anything, and it amazes me that anyone knows what I am doing.”
Previous winners have included Noam Pikelny (2010), Sammy Shelor (2011), Mark Johnson (2012), Jens Kruger (2013), and Eddie Adcock (2014).
When asked by Bluegrass Today what he would be doing with the honorarium from his Steve Martin Prize, Danny says, “I’m going to invest it back into the art, back into the banjo community. I have a new record coming out in November, and then I’m thinking of doing a straight up banjo record. I’ve never done that, and I’ve started talking to some of the guys I’d like to have play on there with me. I also have an idea for a contemporary piece for banjo, and I hope to finally get to work on that.”
Got Myself Together hits the streets this fall with another in the works this winter for a straight up banjo record, and he’s also working on a suite of contemporary music for banjo and tuba. Barnes has released over ten albums and has been featured on over 50 others. His most recent album, Junior Sampled [June 2014], is available to stream athttp://dannybarnes.bandcamp.com/album/junior-sampled.

His skills as an instrumentalist and his open embrace and infectious love of music for music’s sake, have brought him to share the stage and record with a wide array of marquee artists that reads like a who’s who among broad musical landscapes, ranging from bluegrass greats Bela Fleck, Del McCoury, and Sam Bush, newgrass stars Yonder Mountain String band, to Americana artists Robert Earl Keen, Lyle Lovett, and Nickel Creek, to Jam friendly Gov’t Mule, Leftover Salmon, and Keller Williams, to jazz and blues instrumentalists Bill Frisell, Chuck Leavell, and John Popper, to members of the punk and metal Butthole Surfers, Dead Kennedys, and Ministry. He’s collaborated and shared stages with the likes of Bill Frisell, Yonder Mountain String Band, Robert Earl Keen and Dave Matthews, as well as wailed on a flying V guitar with members of the Butthole Surfers.